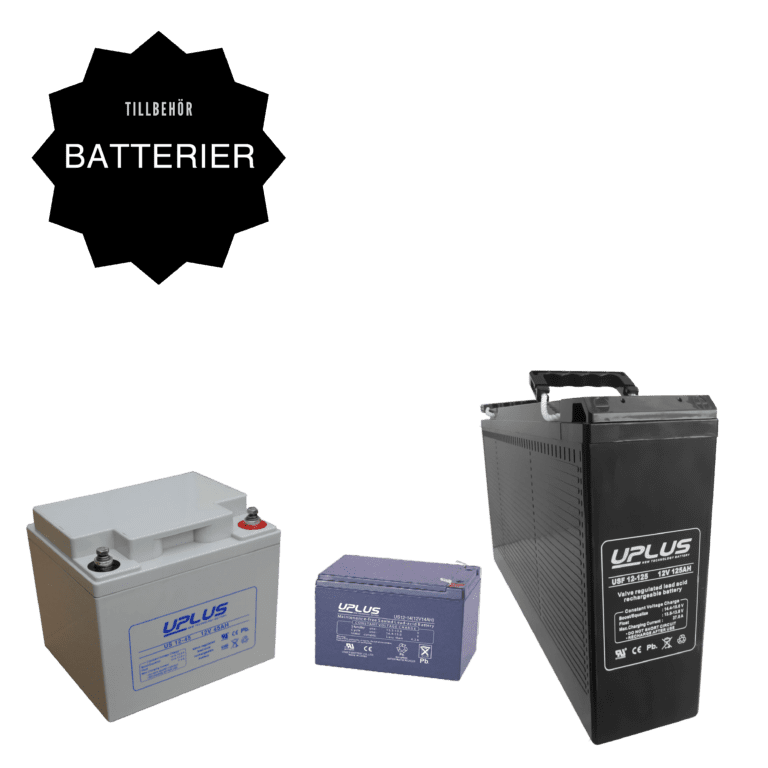 There are a variety of brands of AGM (Absorbent Glass Mat) batteries available the Nordic market.
Milleteknik has carefully tested the batteries we sell and market for long-term use and capacity. We therefore dare to state that the batteries we supply are of a very high quality. AGM batteries benefit from being maintenance-free, completely sealed against gases or hydrogen and are leak-free, even if the shell bursts. AGM batteries are safer than traditional batteries as the electrolyte is wrapped in glass wool between the lead plates in the battery. There are different types of battery ratings. We sell 6-9 year of batteries and 10-12 year of batteries.
EUROBAT is a guide and not a classification

During the 1990s, most battery production was moved to countries such as China, Japan, Taiwan and others for cost and environmental reasons. Vehicle batteries are still produced in Europe, but not industrial batteries.
EUROBAT provides a guide that estimates the lifetime of batteries on the basis of design and manufacture, but it is not a rating. Asian producers maintain high quality, carry out on-going tests and indicate the service life of batteries in accordance with the EUROBAT recommendations. A common misunderstanding: what is the EUROBAT rating on batteries? Since EUROBAT is a guide that estimates longevity based on design and manufacturing, it cannot be said that a battery has a EUROBAT classification.

How long does a battery last?
Battery life varies greatly depending on how the battery is used and charged, ambient temperature, and other factors. In extreme cases, there can also be large variations in quality between different manufacturers. This is especially true if they are labeled as 3-5 year batteries.

How is the battery’s charge state measured?

The charge state, or rather the depth of the discharge, can be measured by measuring the voltage. However, this does not answer the question of how good the battery capacity is (ampere hours=Ah). Only one load test can demonstrate the battery’s residual capacity and aging. Milleteknik recommends a charge voltage of 13.65 V per 12 V battery.

How is a load test done?
When there are connected battery cells with visible poles/connectors, then it is possible to load each cell with a large current. (Note that system standby time is affected during and after the test.) Another way to ensure system backup uptime is to size right from the start and then deliver a power supply with built-in load testing. As a sole Nordic producer, Milleteknik offers a solution where the power supply itself tests the batteries for short-term high current (5 seconds) once a week. The system then tracks the battery status and alerts for aged batteries. This system comes in the optional BAS Series (T/BAS SDX) as well as in our SSF, EN54 and NOVA Series as standard. Please note that our tests are carefully tested with our battery provider. We cannot guarantee proper operation of other battery products.